1. The Wizard of Oz (1939)
Frank L. Baum’s books about Oz have been interpreted many, many ways since The Wonderful Wizard of Oz was first published in 1900, but the 1939 MGM musical remains the best-known and best-loved incarnation of Dorothy and her adventures in the magical land of Oz.

2. Willy Wonka and the Chocolate Factory (1971)
This gloriously psychedelic adaptation of Roald Dahl’s Charlie and the Chocolate Factory was a box-office flop when it first came out, but has since grown into a treasured cult classic. Tim Burton’s remake, starring Johnny Depp as the eccentric candy maker, couldn’t rival the ’70s film and the perfection of Gene Wilder as Wonka. For more great films based on Dahl’s novels, check out Fantastic Mr. Fox (2009) and The Witches (1990).

3. The Iron Giant (1999)
The 1968 novel by British Poet Laureate Ted Hughes was adapted and transported to America with its Cold War paranoia intact in the marvelously underrated 1999 film. Director Brad Bird would go on to helm The Incredibles for Pixar, but, for many fans, The Iron Giant has even more heart and an even greater message: You can choose who you want to be.

4. A Little Princess (1995)
The classic 1905 novel about young Sara Crewe–who goes from wealth and privilege to virtual slavery–was already a popular 1939 black-and-white movie version with Shirley Temple. But the ’90s film, directed by Alfonso Cuaron, made the most of its rich color palette, infused with gorgeously surreal glimpses of India, where Sara spent her happy childhood.

5. The Black Stallion (1979)
The much-loved 1941 novel by Walter Farley became a beautiful, heartfelt screen tribute to the bond between a boy and a prized Arab racehorse in this 1979 film, which was nominated for two Oscars, including one for the late Mickey Rooney.

6. The Jungle Book (1967)
Disney’s musical version of Rudyard Kipling’s classic jungle tale is obviously a far cry from the book, but it’s still a great celebration of Kipling’s characters and a fantastic introduction to the writer’s works.

7. Coraline (2009)
Neil Gaiman’s award-winning 2002 fantasy novel was adapted into an Oscar-nominated animated film from Henry Selick, the director of The Nightmare Before Christmas. The story—about a young girl whose wish for a more loving and attentive mother comes true in a parallel universe where the “Other Mother” with button eyes seems to be everything she ever wanted—has been compared to the classic Alice in Wonderland.

8. Charlotte’s Web (1973)
One of the best-loved and best-selling children’s novels of all time (written in 1952 by E.B. White), came to the big screen in 1973. The animated film boasted songs written by the Sherman Brothers, the songwriting duo of Mary Poppins and The Jungle Book fame. Like the book, the movie inspired generations of animal lovers and vegetarians. Of course, you may prefer the live-action version from 2006.

9. The Neverending Story (1984)
Based on the fantasy novel by German author Michael Ende (which was translated into English in 1983), the 1984 film yielded two sequels, but the first one, starring Barret Oliver and Noah Hathaway, is the ones fans remember best.

10. Freaky Friday (2003)
The 1972 novel by Mary Rodgers had already been made into a film starring Jodie Foster as the teen who accidentally trades bodies with he mother, but the version with Lindsay Lohan and Jamie Lee Curtis is our favorite. Curtis is utterly believable as a teenager making the most out of being in her mom’s shoes for a day.

11. Stuart Little (1999)
The beloved 1945 E.B. White novel about a talking mouse got a lovingly faithful adaptation with great effects and a well-chosen cast, including Michael J. Fox as the voice of Stuart, Hugh Laurie and Geena Davis as Mr. and Mrs. Little and Nathan Lane as Stuart’s nemesis, Snowbell the cat.

12. Where the Wild Things Are (2009)
Spike Jonze gave us one of the most creative takes on a classic children’s novel by showing Max’s complicated real life before plunging us into the fantasy, beast-filled jungle of Maurice Sendak’s cherished 1963 story. It might be more geared towards adults, but it still speaks to the child in all of us.

The Hobbit
Rated: PG-13
Following the huge success of the Lord of the Rings movies, The Hobbit was bound for the silver screen. The Hobbit: An Unexpected Journey is the first film in the the forthcoming trilogy. Like the beloved book, the film features all of your favorite Hobbits and Dwarves, as well as the wise old wizard, Gandalf the Grey. Battles with scary Goblins, Orcs, and other enemies make this film better suited for older kids.

Diary of a Wimpy Kid
Rated: PG
Have your kids ever wondered what Greg Heffley's middle-school adventures would look like in real life? If your kid is one of the thousands of Wimpy Kid fans, he'll love the movie series based on the best-selling books. The latest film, Diary of a Wimpy Kid: Dog Days, is now available on DVD.

Dr. Seuss' Horton Hears a Who!
Rated: G
Everyone loves a good Dr. Seuss book, so it was only a matter of time before one was made into a major motion picture. The adorably wacky plot involves Horton the Elephant, as he struggles to save a microscopic community of Who's that nobody believes exists. Starring the voices of Jim Carrey and Steve Carell, and full of the typical crazy lines and lyrics you've come to expect from any Dr. Seuss creation, both kids and parents will love this movie.

James and the Giant Peach
Rated: PG
You'd be hard-pressed to find a child who has not read this book. James is an orphan who is forced to deal with two terrible aunts as guardians. One day, James befriends a group of human-like bugs who live in a giant peach, all of who take James on the adventure of a lifetime as they set off on a journey to New York City. Some scary images give this classic movie its PG rating.

Films based on children's books - Boston.com

"Ramona and Beezus," based on the Beverly Cleary classic, "Beezus and Ramona," is now in theaters. Boston.com has put together a list of some of our favorite children's books that have been turned into movies &mdash sometimes with mixed results as you'll see from the reviews. 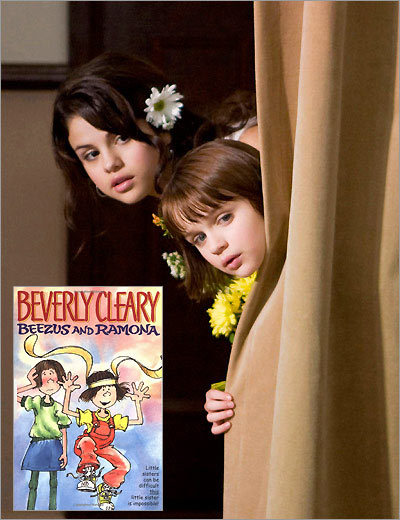 The classic Walt Disney film is based on the novel, "Bambi, a Life in the Woods," by Austrian author Felix Salten.

The Cat in the Hat (2003)
"The big-screen 'Cat' represents everything corrupt, bloated, and wrong with mainstream Hollywood movies. It takes a slender toddler-classic about the joys of anarchy -- a 10-minute bedtime read at best -- and pumps it into 73 minutes of state-of-the-art vulgarity." (Globe, 2003)

A SERIES OF UNFORTUNATE EVENTS